It’s been almost 30 years since I put on my first pair of skis and snowplowed my way down The Face at Suicide Six in South Pomfret, Vermont.  In the mid-1990s, I took up snowboarding at our middle-school’s ski club held weekly at Pat’s Peak in
Henniker, New Hampshire.  My 13-year old self would never believe that I’d grow up to become a climate scientist, let alone have the opportunity to share climate research with some of the most talented professional skiers and riders in the world.  And yet last week I found myself invited to present at the Protect Our Winters Riders’ Summit at Squaw Valley. 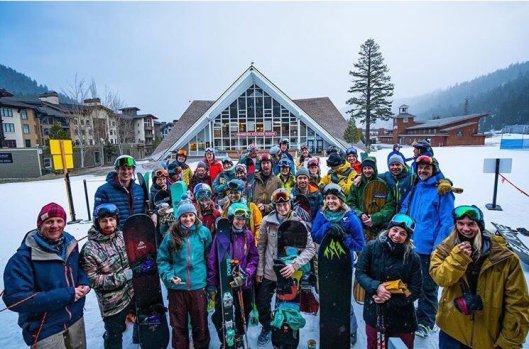 I first met Jeremy Jones and Chris Steinkamp, co-founders of Protect Our Winters, in 2010 on a visit to Washington, DC.  The trip stemmed from a short film by Teton Gravity Research in 2009 called Generations, which “humanizes the debate on climate change by exploring the fragility of winter and the intrinsic value of snow to people across generations and cultures.”  In 2012, I led a report Climate Impacts on the Winter Tourism Economy in the United States published jointly with Protect Our Winters and the Natural Resources Defense Council.  Most recently I accepted a position on POW’s Science Alliance science advisory board.  We convened last week at the Fall Meeting of the American Geophysical Union (AGU) in San Francisco to discuss research priorities among other topics.

As a lifelong winter sports enthusiast and climate scientist, I’d be challenged to find a better way to get involved in a grassroots community dedicated to initiating action on climate change.  It was an honor to speak at the summit and to join the POW Science Alliance.  Thanks to Jeremy, Chris, and POW supporters and partners for creating such a positive and effective community!